A good grade in school can provide motivation to students. But so can toys, candy and school supplies.

At Plantation Elementary, a partnership with the GFWC Plantation Woman’s Club has kept the school’s Tiger Bucks program running for eight years. Teachers and administrators award Monopoly-like money regularly for good attendance, following school rules and outstanding extra effort. Then twice a month students line up to apply the currency in a small shop operated by Woman’s Club volunteers.

The club’s Judy McLeod serves as the banker, keeping a small book with each student’s name. Children who don’t see anything that catches their eye in one month can bank their money for later.

“So they also learn about saving,” she said.

Usually two Woman’s Club volunteers escort the students around the various options, a process than can take more time than one might expect. (Think of the time your child attempted to cash in game-play tickets at a recent arcade visit…)

There are pencils and glue bottles neatly lined up in one corner. Small candies are placed in shoebox-sized drawers in another portion. 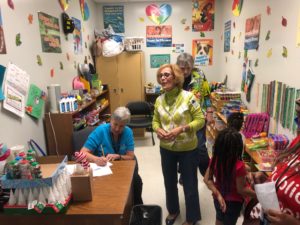 The Woman’s Club stocks the store monthly, with its biggest collection coming from the club’s holiday lunch each December, when members contribute items.

Vinson Jones, magnet coordinator at Plantation Elementary, notes that the school, about one block west of State Road 7, is in a low-income neighborhood, and students’ families often don’t have much to spend on discretionary items.

“One child bought a small Christmas tree,” Jones said. “He said that would be the main tree for his family’s holiday season.”

The program started in about 2012 as Frost bucks, in honor of the principal at that time, Tonya Frost. When Judith Pitter became principal three years ago, the name was changed to Tiger Bucks, reflecting the school’s mascot.

Wilma “Tippy” DeMoss Drainer, a very active person in the Plantation community, passed away on Christmas Day. She was 94.

Feb. 29 happens only every four years; to make the most of it, Parks and Rec is offering “A Dr. Seuss Birthday Celebration” at 10 a.m. at Plantation Community Center, 5555 Palm Tree Road. There will be food and crafts and the flyer says
“You could not
would not
want to miss
a celebration such as this!”
Chain Reaction, a Journey and Styx tribute band, is next up in the city’s Rock the Park concert series at Plantation Central Park. The food trucks arrive at 6 p.m. and the music at 7 p.m. The date is Friday, Jan. 3.

The Plantation City Council meets at 7:30 p.m. Wednesday, Jan. 8 and Jan. 15 this month. We get the agenda later this week. You can check it, likely Friday, at Plantation.org.

Nick Sortal is president of the Plantation City Council. Contact him at NSortal@Plantation.org or 954-498-5337.