No, we weren’t on the ballot 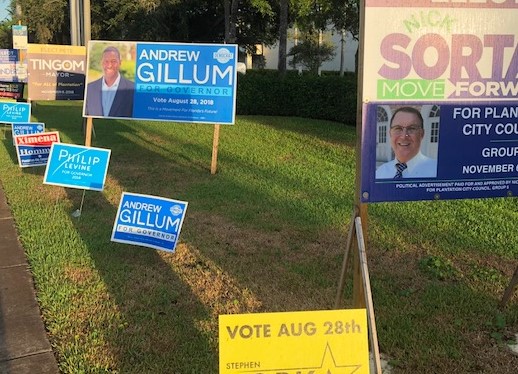 “I looked to vote for Plantation council, but it wasn’t there!”

That was a frequent phone call the City Hall switchboard received this week. Some voters, confused by the flood of political signs across Plantation, didn’t realize the city election isn’t until Nov. 6.  Next time around, city candidate signs may face some restrictions.

In November 2014, Plantation residents voted to move municipal elections from March to November to coincide with state and national elections. March elections, the last one of which was in 2015, meant candidates filed in January of an election year and had eight weeks to campaign prior to the election. Our first fall election was November 2016. Now, I, for example, filed to run for office in February and have been meeting people and researching topics for months. However, the city doesn’t allow campaign signs until after the official city qualifying period ends in late June. Which also coincides with state campaigns.

So city candidate signs will be on our streets and (hopefully) your yard for about four months total. There have been numerous complaints from residents (and from me) about the number of signs on the roads. Some city leaders at the last council meeting suggested enacting an ordinance that would delay city candidates putting up signs until after the primary election.

I think that’s a good idea, and when I am elected I will push for some control of all these signs.