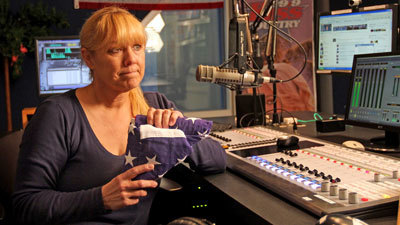 Many of you didn’t know me back in 2011, when I wrote this article about WKIS’ Darlene Evans and her tradition of playing our National Anthem at noon every day. Now, on Sept. 11 of this year, I think it’s worth revisiting. Here’s the link for those who like to share such things.

Update: Now I hear some are having trouble accessing the link. So I cut-and-pasted the article here, for those who want to read it. My apologies.

As Kenny Chesney wraps up singing about a bottle of wine and two Dixie cups, Darlene Evans punches up the usual noon voiceover, and a robust male voice says:

To those who serve, from all of us in South Florida … thanks.

Oh, say can you see,

By the dawn’s early light…

The “We Support Our Troops” paint may have faded from storefront windows since Sept. 11, 2001, but there’s a constant at Evans’ radio station, WKIS 99.9 FM: Every weekday at noon, you’ll hear a country artist perform the national anthem.

“We just take things for granted,” Evans says. “Playing the national anthem reminds people that there’s a war going on, that people put their lives in danger. And that includes our servicemen in Homestead, and our firemen and police officers here, too.”

Many commercial radio stations played the national anthem right after 9-11, but most dropped it. The reason: It stops the party, and listeners push a different button on their car radios. Television producers know that, too, which is why they cut to commercial seconds before a singer starts the pre-game anthem.

But country radio has always bathed itself in red, white and blue. So most of the nation’s 1,800 country music stations air either the pledge of allegiance, the national anthem or both, says Lon Helton, publisher of Country Aircheck, a trade publication based in Nashville. (West Palm Beach’s WIRK, 107.9 FM, also plays the national anthem at noon.)

“It’s just part of the fabric of a country station,” Helton says. “But if anything, Sept. 11 has set it in cement.”

WKIS took the anthem off the air in 2007, but listeners complained so vigorously that management back-tracked. Evans said the station once did an Internet survey and support was 97 percent in favor.

The national anthem ritual has also connected Evans with listeners, such as the sergeant who listened via the Internet while in Baghdad. He sent her an American flag that had flown on his base, a gift Evans hugs and “treasures.”

And listeners here thank her, too. People such as Gil Crespo, who served in the Air Force for three years and has a son headed to Afghanistan.

“The more time goes by, the more complacent people become,” says Crespo, now an air-conditioning repair dispatcher. “I want people to remember why we’re over there.”

And the rocket’s red glare,

the bombs bursting in air…

Evans is a military brat of an Air Force colonel. Her family bounced from military bases in Alabama to Canada to San Antonio to Oklahoma to Bermuda, then Connecticut in 1969, as Dad headed off to Vietnam.

She was 11, riding home with her grandmother from ballet class, when they saw their driveway full of cars, and men in uniform.

“My dad was due to be discharged that month,” she recalls. “I thought he had come home.”

Instead, his helicopter had been shot down, and he was dead at age 47.

“I think of him every time I play this,” she says. “And I remember that some people weren’t so nice to the military back then.”

About 90 seconds from opening note, Rimes nails it:

O’er the land of the free

“It’s a minute and a half, two minutes at most,” Evans says. “I think it’s important to take that time and remember people are putting their lives in danger.

She punches another button, then a big red “ON AIR” light goes on:

“Never forget about those men and women that serve our country,” she tells listeners, as she does every day at this time. “We live in the greatest country in the world.”

Then Keith Urban starts singing about how the days go by, running through a river of neon signs.