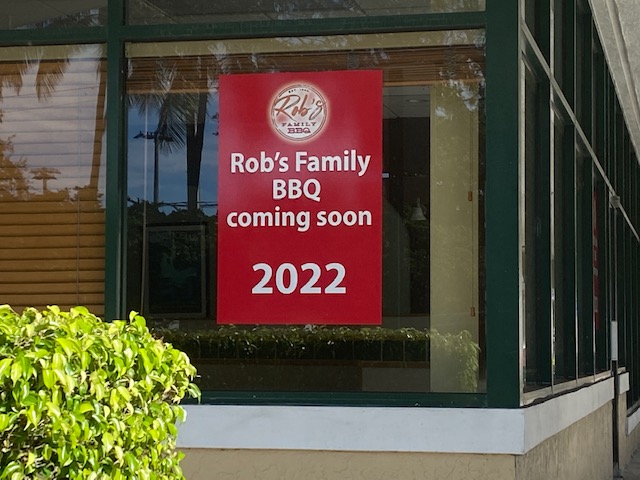 Rob Scruby is looking to expand his barbecue business, and that’s a good thing for Plantation.

Scruby, who owns Rob’s barbecue on State Road 84 in Davie, is opening a smaller location at Vizcaya Square in Plantation, the former Antonio’s site on the northwest corner of Cleary and Nob Hill. His optimistic construction schedule has a February opening penciled in. (Don’t hold him to it.)

His Davie restaurant is 8,300 square feet and employs about 50. The Plantation site is about 2,100 square feet and he hopes to run it with 10. He expects more of a carryout crowd, although there will be inside seats for dining.

“Covid has brought about many fewer people dining in and more people ordering takeout,” Scruby said. “I really wasn’t looking to expand, but my wife and my son thought a smaller concept might be interesting to some people.”

The Scrubys will own the Plantation franchise, but if it works out, he could eventually parcel out other venues to investors.

“We’ve had many people over the years ask about franchising,” he said. “Our recipes and food, that’s all proven, but matching the size of the Davie store… that’s insurmountable.”

Scruby, who managed operations and construction at both Woody’s and Sonny’s barbecue franchises during a 40-year career, said he hopes to include all the menu items from the Davie store, but isn’t positive that will work. All the food will be cooked on-site, he said.

The city of Plantation held a predevelopment meeting with Scruby on Dec. 3. That’s when Plantation staffers of various department do a quick check to see if there are any deal-breaking problems on the horizon. There were none, although every project usually has at least a minor adjustment to be made.

City staffers say Scruby currently holds a demolition permit, then will get his interior modeling approval. The inside is being completely changed.

Scruby originally owned two “Scruby’s” restaurants but sold the one in Pembroke Pines. A legal battle with those new owners prompted him to change the Davie restaurant name to “Rob’s.”