Someone at my Publix wins $1 million

It’s been a difficult few days in Plantation recently, with the sad (the death of councilmember Mark Hyatt) and the mildly inconvenient (the news that my Publix would sometime be closed for a year).

So I’m happy to share some news that’s good for at least one person: The Florida Lottery announced Wednesday that a person hit a $1 million scratch-off ticket – at that aforementioned Publix!

The Plantation city council last week approved plans for a compete makeover at the store, which will be closed about a year. Because the permitting process sometimes can hit a bump, Publix is declining to declare when the store will close. We had been given summer of 2020 as an estimate but other reports now say it could be held up until January 2021. Stay tuned.

And, oh, I’m declining to name the person. I think it’ll be a lot more fun to walk through Publix and try to guess who it might be. 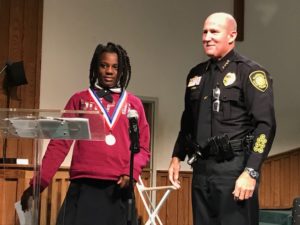 Police officers throughout Plantation are conducting GRADE graduations for fifth-graders who have completed a course usually taught by our school resource officers.

My children went through DARE (Drug Abuse Resistance Education). GRADE is the next iteration and stands for “Gang Resistance and Drug Education.” The course, once a week for 10 weeks, also covers internet safety and conflict resolution.

On Friday, I attended the ceremony at Sawgrass Adventist School, west of Hiatus Road in Plantation. There will be several such events in coming weeks at our schools, and we city officials try to have at least one of us in person to as many as we can.

Because our children are growing up quicker nowadays, I questioned for a moment the idea of GRADE not starting until fifth grade. But officers point out that GRADE serves as middle-school prep – things are about to get a lot different for them – and that’s a good point.

In the photo, a Sawgrass Adventist essay winner reads her entry, while Chief Howard Harrison stands by.

The city is showing the movie “Tangled” at 6 p.m. Saturday at the Plantation Community Center as part of a family night from 4-8 p.m. It is free admission and there will be food trucks, arts and crafts, outside games and playgrounds. Call 954-797-2180.

The Plantation City Council meets at 7:30 p.m. Wednesday, Feb. 19 at city hall. The agenda isn’t out yet, but I’m sure we’ll be discussion options for filling the seat of Mr. Hyatt. His seat was up for the Nov. 3 general election, so the question is whether to have a special election, appoint someone or leave it open until the election.

Nick Sortal is President of the Plantation City Council. Contact him at 954-325-0504 of NickSortal@BellSouth.net. This newsletter originates on his site, NickSortal.com and is shared via various platforms.