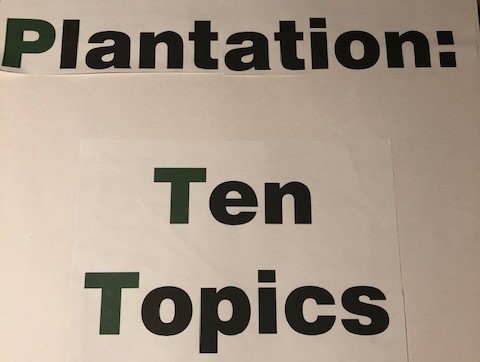 I have been making the rounds in recent weeks giving residents a general update, using an old-fashioned flip chart to share “10 Topics in Plantation.” The goal is to let everyone know what we’re working on. So I thought I’d share it here.

10. Restaurants and entertainment: Kaluz, which is comparable to JAlexander’s, is on the council agenda for approval Wednesday. Expansion is also coming to the former Sears portion of the Westfield Broward Mall, with a YOLO and other dining. We need more nice places for people to eat and fun things for residents to do.

8. Vacation Rentals. It looked for a while that the Florida Legislature was going to bigfoot us and pass laws that would supersede the ordinance the Plantation City Council recently passed. But what we passed earlier this year, which will help rein in those in Plantation who try to run party houses, will stay in effect.

6. Census. We’re gearing up to make sure everyone in Plantation is counted. Why does it matter? Well, federal funds for such things as roads are based on population. Some experts say an uncounted person means we miss out on $2,000 per year (times the 10 years until the next census).

5. Midtown. Every city is facing growth challenges. Decades ago, our leaders mapped out a plan to center our major growth between University and Pine Island. More apartments are under construction, bringing younger people who, hopefully, will eat at Plantation restaurants, shop at Plantation stores, and, when it comes time for the next step, buy Plantation homes.

4. Traffic. Our residents have been clear about voicing their frustration with the areas near State Road 84 and University/Pine Island. This topic has been a major focus for Mayor Lynn Stoner, who has worked with county leaders and other cities on several endeavors to improve traffic. She notes that about 70 percent of all traffic in Plantation is from non-residents passing through.

3. Public safety. Please put 954-797-2100 into your cellphone now, and label it POLICE. It is the non-emergency number. Over and over again, I’ve heard police officers tell homeowners groups that community involvement helps deter crime. If you think something looks suspicious, please pick up and the phone and call them.

2. Schools. Education doesn’t fall under the city’s umbrella – there’s a school board and a separate tax system for that – but county numbers show we are among the leaders in shipping our kids somewhere other than their assigned school. Our Education Advisory Board is working on solutions.

1. The future. Any decisions made have to be done while also weighing the impact on our future budget, the environment and our future needs of residents. There also are issues out there that nobody has even thought of yet. All we can do is make sure we have the flexibility and the resources to adjust when the next big challenge hits.

I was delighted to be honored as a “VITA Champion“ last weekend at Heritage Park in Plantation. (I’m pictured with the organization’s David Acre.)

My role was to spread the word in our city about the program, using platforms such as this newsletter. Go to VITATaxesFree.org.

The city’s education advisory board meets at 7 p.m. Monday, May 6, at City Hall. A discussion of a recent report from the Broward School Board on demographics is on the agenda.

There also are meetings for our two special districts this week: The Midtown Advisory Board gathers from noon to 1:30 p.m. Wednesday, May 8, at the Development Service Building. The Gateway Advisory Board meets at the same time on Thursday. (I won’t be around for the second one; my family is all flying to Syracuse for my son’s college graduation.) The scheduled meeting for the Planning and Zoning Board, which was scheduled for Tuesday, has been canceled.

The Plantation City Council gathers at 6:30 p.m. Wednesday, May 8, for a budget workshop. Department heads will be discussing their upcoming plans. Our twice-monthly meeting starts at 7:30 p.m.