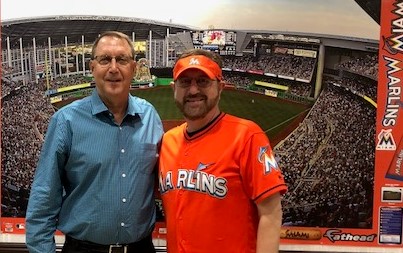 Laurence Leavy, aka “Marlins Man,” and I go back a ways

As the Miami Heat made its first run to an NBA championship in 2006, I was assigned to write fan-in-the-stands stories for the Sun-Sentinel. Along the way, I met a superfan named Laurence Leavy.

We kept in touch throughout the years, sharing views on community developments, sports and ways to help South Florida. I (jealously) heard his tales of traveling the nation to watch sports events. Then in 2012, because he wore an orange jersey to the Giants-Tigers World Series game and sat in the front row, he became this person the rest of the world now knows as “Marlins Man.”

He now has almost 90,000 Twitter followers, poses for selfies with fans at ballparks everywhere (except Marlins Park this year, but I’ll let that one go) — and still maintains his law practice, all the while making himself available for charitable events and sometimes snatching unsuspecting fans and sharing his front-row seats with them.

So when I announced my candidacy for Plantation City Council, I knew he’d step and support me. He wrote me a check on Wednesday.

All of us campaigning are receiving checks from supporters and acquaintances, and I appreciate every single one. You don’t have to wear an orange jersey or even have a Twitter account. But when someone who you knew way-back-when comes through with support, yes, that feels good.