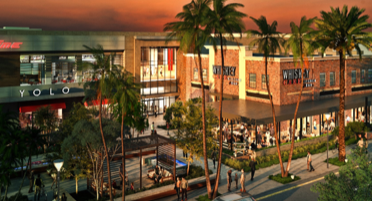 The creation of a dining and entertainment centerpiece is coming together: The City Council approved two designs for new restaurants at its Sept. 18 meeting.

The additions are called Whiskey Cake and Lazy Dog. They join YOLO, a brand popular on Fort Lauderdale’s Las Olas, to form a triumvirate to replace the old Sears at the Westfield Broward Mall.

Central Plantation is going through a massive overhaul, with the development at Sears being accompanied by new project at the old Fashion Mall, called Plantation Walk. The overall area, called Midtown, will be enhanced by a shuttle service and other features the city is working on.

Back to the two restaurants: Whiskey Cake  comes to us after five locations in Texas, one in Oklahoma City and one in Tampa. The web site says they specialize in craft cocktails, local ingredients and farm-fresh comfort food. Lazy Dog lists 25 California locations and others nationwide and promotes “hand-crafted American Food and Drink.” They also like to play around with childhood favorites, such as “Spaghetti Squash and Beetballs, a tasty, robust vegetarian spin on the classic dish.”

Both properties had presented their plans to the council earlier in the year, but the council didn’t buy in. So we asked they try again, work with our Planning and Zoning Division, and made some modifications. At our Sept. 18 meeting, we felt comfortable with what we saw. The next step is for the city to approve a construction permit. (YOLO’s approval before the city council is still in the future.)

My personal opinion is that this area is the dead-center point for what we’re trying to do at Midtown. So the bar of expectation is going to be really high. It needs to be special.

The idea of a coordinated area for residents and nightlife will be connected with a shuttle. There will be East, West and Midtown routes.

Overall, I’m happy because one complaint I’ve heard about Plantation is that we need more restaurant offerings. I like many of the ones we have, but residents say they want more, and, if I were evaluating us, I’d say we are behind what other cities offer. But we’re working on it.

Parks: The Parks and Recreation Advisory Board meets at 6:30 p.m. Tuesday, Sept. 24, at Volunteer Park. On the agenda are discussions about the city bond, the master plan, senior programming and a new Martin Luther King Day celebration.

Vietnam talk: Ret. Colonel Connie Christensen will speak at 6:30 p.m. Thursday, Sept. 26, at the Plantation Historical Museum, 511 N. Fig Tree Lane. Her talk will be on “The Sixties and Serving in the Army in Vietnam.” Also the museum’s “America in the 1960s” exhibit ends Oct. 5 as the museum prepares for Winter Wonderland. Call 954-797-2722

Volunteer signup: The Parks and Recreation Department is recruiting new volunteers, age 14 and over, to help with events and activities. The orientation is from 9:30 a.m. to 11 a.m. Saturday, Sept. 28 at Volunteer Park. Please let the department know you’re coming. Call 954-452-2522.