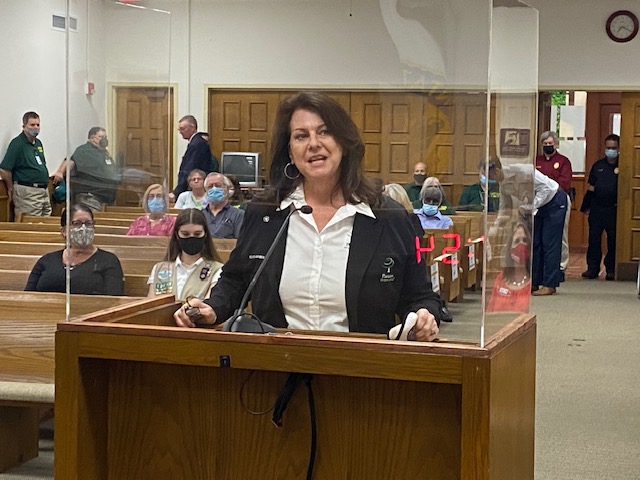 The Florida League of Cities recognized Plantation Council President Denise Horland with a 2021 Home Rule Hero
Award for her advocacy efforts during the 2021 Legislative Session.

Horland spoke to state senators and representatives in an effort t protect the Home Rule powers of Florida’s municipalities. She is the first Plantation council member ever to be recognized by the Florida League of Cities.

Home Rule is the ability for a city to address local problems with local solutions with minimal state interference. Home Rule Hero Award recipients are local government officials, both elected and nonelected, who consistently responded to the League’s request to reach out to members of the legislature and help give a local perspective on an issue.

“A multitude of egregious attacks on home rule were introduced during the 2021 Legislative Session and because of the restrictions put on public testimony due to COVID-19, we had to work harder than ever to ensure our voices were heard and our communities protected,” Horland said. “I will continue to fight against that which threatens our ability to govern locally, and seek to promote legislation which enhances, rather than harms, our community.”

A resident of Plantation for 27 years, Horland was elected to the City Council in November 2018, where she currently serves as Council President. Her background is in retail account management, but since 1998 she has utilized her talent and expertise
to advocate for others, most notably in Plantation’s schools. From Central Park Elementary to South Plantation High School, she has served in many leadership positions, including taking on the role of president in organizations such as the PTA, sports booster clubs
and magnet parent organization. In 2010, she was recognized as a county-wide Volunteer of the Year for Broward County Public Schools.

Horland also serves on the Board of Directors for the Broward League of Cities and on both the Advocacy and Municipal Affairs Committees for the Florida League of Cities. Horland has advocated on the dais and before the Legislature on issues such as
Education, Human Trafficking, Hate Crimes, Gun Safety and State Preemptions.

Founded in 1922, the Florida League of Cities is the united voice for Florida’s municipal governments. Its goals are to promote local self-government and serve the needs of Florida’s cities, which are formed and governed by their citizens. The League believes in “Local Voices Making Local Choices,” which focuses on the impact citizens and city
eaders have in improving Florida’s communities. For more information, visit flcities.com.