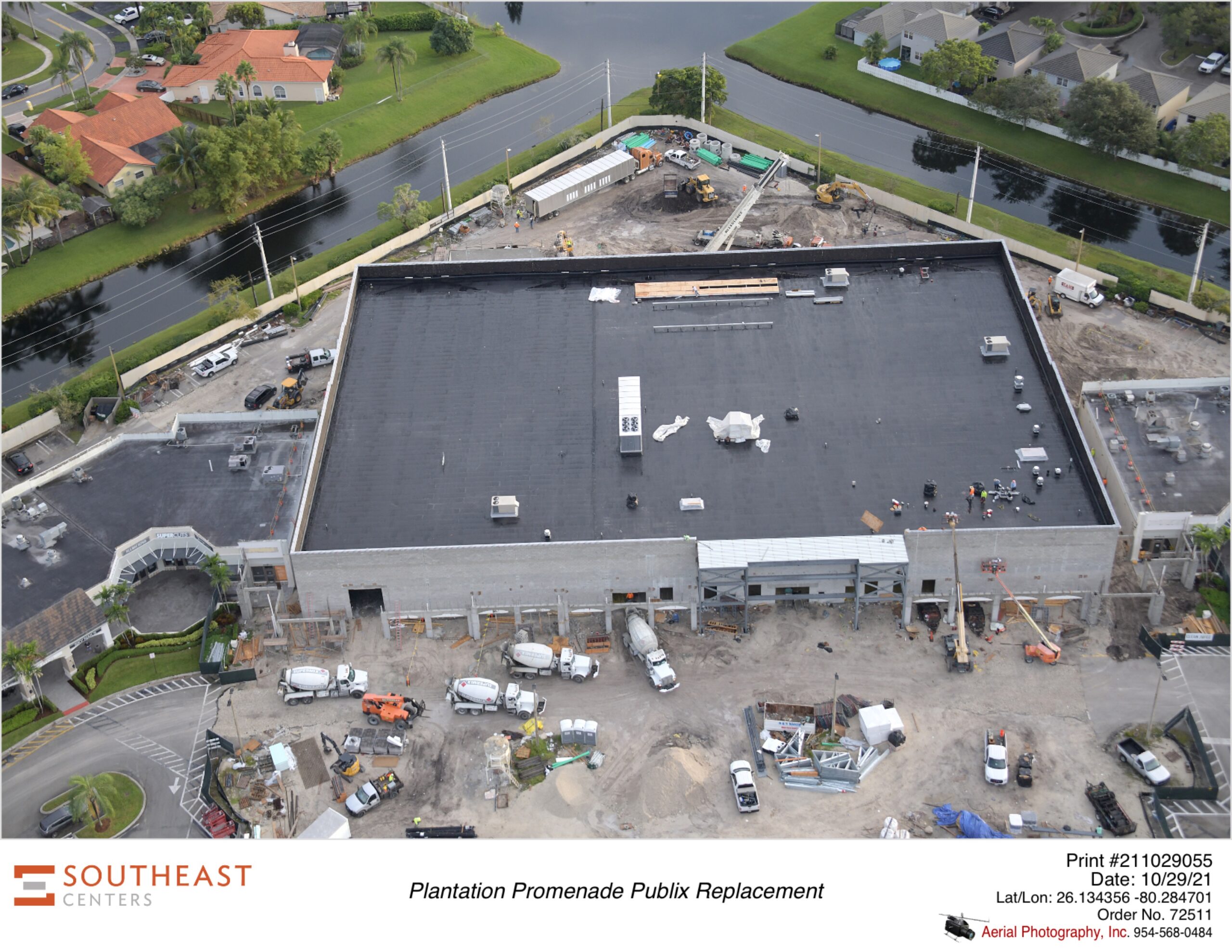 I’ve tried to adapt to other Publix stores in my area, and while they’re serviceable, I’m still walking around lost half the time.

So I contacted those in charge of refurbishing my Publix on Cleary to see how long until I’m back “home.”

Now, construction deadlines are fluid, and I’m not holding them to it. But it looks like April is a good bet.

For those interested, I’ve included an aerial photo they provided, shot in late October. They say they are currently dried in and interior slab is poured. Many trades are working inside and sitework, stucco and front façade construction is well underway.

The city of Plantation will conduct a public workshop at 6 p.m. Thursday, Dec. 9, at City Hall to discuss a new bridge that could help relieve traffic in Midtown.

The city has initiated a Project Development and Environment (PD&E) Study to evaluate conditions for a new bridge over the South Florida Water Management District (SFWMD) New River Canal between SR 84 and SW 17th Street.

The meeting will also be available on Zoom. Go to http://tinyurl.com/kc3vmuw3.

Erik Anderson was elected city council president during the Nov. 17 meeting and Jennifer Andreu was selected as president pro-tem.

The position usually rotates among the five council members.

As president, it is Anderson’s duty to run the twice-monthly meetings. Andreu steps in if Anderson is absent or late.

The event, which features clergy from several houses of worship (and religions), will be in-person and also shown via St. Benedict’s Facebook page.

As always, food trucks will be stationed at the park.

Meanwhile, the parks department announced that the Beatles tribute act, which was rained out in November, will be rescheduled. They are still working on a date.

The annual “Light Up City Hall” event is set for 5-9 p.m. Saturday, Dec. 4. Residents are invited to stroll the grounds and view holiday decorations.

An added feature this year is a “letters to Santa”  mailbox drop. Those wishing to reach the man at the North Pole may drop a letter into the box. (Deadline Dec. 17.) Include a return address and get an acknowledgement card, hopefully before Christmas, from Santa, although the handwriting might be similar to employees at the Parks Department.

The City of Planation is hosting its leg of the Mayors’ Chess Challenge at 10 a.m. Saturday, Dec. 4, at Volunteer Park. The free event is part of a countywide initiative by local mayors to highlight the benefits of chess for children.

Created by Sunrise Mayor Mike Ryan in 2014 to highlight the benefits of chess in an academic environment, each month during the school year, the challenge rotates to different Broward County cities. This year, 21 cities have a chess challenge day.