Here are some updates on public safety, city operations and an idea to help our city. The Plantation City Council held a workshop Wednesday, April 1 — a workshop means we gathered to talk about ideas but took no votes – at city hall.

It was a history-making night, one could say, as it was the first virtual meeting in our city’s history. Two members and our city attorney attended via modern technology, which is now legal under an order Gov. Ron DeSantis filed last month. There were eight live attendees – elected officials and support staff – and we followed social distancing practices, generously spacing ourselves out.

Here’s the info I’d like to share. It’s a few days late because my NickSortal.com site needed technical support:

Councilmember Denise Horland and I questioned preparation in case we have an exponential rise in the number of cases – for example, I noted that the Army Corps of Engineers is building a makeshift hospital at the Miami Beach Convention Center – and Chief Todd responded that we have hotels that we have communicated with should a worst-case scenario develop. 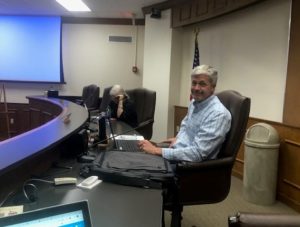 City hall is about 80 percent staffed, with the other personnel either working from home or taking time off for family needs, etc. Mayor Stoner noted that the past 18 months of cross-training employees has been valuable for this moment. Our city budget should not be harmed too badly, although our revenues from such things as recreation programs, state share revenues and the golf course certainly will be down.

I suggested that we carefully study the $2 trillion CARES act passed by the federal government, which might provide reimbursement for coronavirus expenses. Mayor Stoner noted that the staff is already doing so, having that procedure down cold from FEMA reimbursements from hurricanes.

While the state and federal programs to help businesses are vital, a city government is more nimble, and can provide more immediate help. To that end, I suggested our mayor and the city administration develop a plan to help Plantation.

I also provided council members with news articles on how other cities, such as Seattle, Jacksonville and Columbia, S.C., have already taken action, and I’ll email them to you if you request them. (NickSortal@BellSouth.net, put ARTICLES in the subject line). I also noted that Mayor Stoner, a small business owner, probably already had ideas that we could discuss. The end result is that the city council would like to see a proposal from administration at our meeting on April 22. The general idea is that the city would provide funds to help small business that qualify under certain parameters to help pay their rent.

There are lot of details to work out – how much money, what qualifications are necessary, etc. – and the council would vet those details April 22. We might be able to agree to a plan, but there is no promise that we will. For me, this is the No. 1 topic I will focus on the next three weeks.

Figures show that Plantation residents are behind the curve in filling out the Census. Please do yours today, and encourage your friends to do so. You can respond online, by phone, or by mail. We need your help to ensure that Broward County and the city of Plantation receive their fair share of federal funding. Use the 12-digit Census ID you received in the mail and visit: https://my2020census.gov/.

Nick Sortal is President of the Plantation City Council. Contact him at 954-325-0504 or NickSortal@BellSouth.net. This newsletter originates on his site, NickSortal.com, and is shared via various platforms.