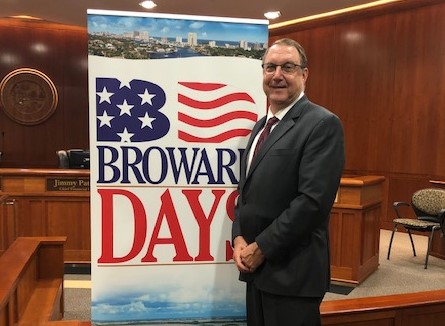 Tallahassee doesn’t have many direct flights from here and it’s more than 450 miles away. So it’s important that policymakers throughout the peninsula do not forget about the needs of the state’s second-largest county (1.9 million population). We account for a large portion of the revenues generated for state coffers.

So in January I joined about 250 business and community leaders, school board members, county commissioners, and city leaders (including my Plantation colleague Denise Horland) in Tallahassee as part of the annual Broward Days event. Broward Days “brings Broward to Tallahassee” to advocate for our county during the state’s legislative session.

Throughout the event, attendees heard from agency heads and legislative leadership about their efforts and priorities heading into the 2020 legislative session.

Broward Days is chaired by Candice Ericks of Tripp Scott Ericks. She, and Executive Director Andrea Knowles, coordinated speaking segments for Commissioner of Agriculture (and Broward native) Nikki Fried, the Governor’s Chief of Staff (who also calls Broward home), the current and next senate president, the next three speakers of the House, and other legislators representing both political parties. I took some quick notes and thought I’d share some highlights with you:

Ken Lawson, executive director of the Department of Economic Opportunity DEO fosters business development in the state, administers economic assistance programs, and works alongside the Department of Emergency Management to oversee disaster recovery. Lawson shared that this year, his office is focused on long-term disaster recovery and talent development. The department is targeting international tourism because those visitors tend to stay longer and spend more money.

Chancellor Jacob Olive, Department of Education talked about the increase in workload during legislative session. He noted that roughly 1,000 of the 4,000 bills filed each year in the legislature affect education. The department this year will focus on supporting dual enrollment opportunities (high school-college), choice for every student, and elevating the teaching profession. “The pool is getting shallow,” he said. “But the greatest impact on outcomes from students is the adult standing in front of them.”

Joe Winkler, Deputy Secretary of the Department of Corrections, said that Broward has a good success rate with its community supervision program, which targets the majority of offenders (i.e., not the first-timers and not those “career” types). He said that the success rate in Broward is about 67 percent, compared to 58 percent statewide. And 93 percent of those who complete their supervision stay out of prison for three years or more. Currently, the state has 95,000 inmates and 164,000 on probation.

Dana Young, CEO of Visit Florida, highlighted that the agency has been fighting a good fight and is naturally concerned because legislators cut Visit Florida significantly over the last few years. She says Visit Florida is vital because tourism is an $86 billion business in Florida.

Halsey Balshears, Secretary of the Florida Department of Business and Professional Regulation:  DBPR is the state agency charged with licensing and regulating businesses and professionals. He noted that gambling laws are on the table at this session, and it could affect his department in their capacity as regulators of industries.

Chad Poppell, Secretary of the Department of Children and Families, spoke about recent federal policy changes that have forced the Department to re-focus on prevention-based programs. This includes child welfare, substance abuse, and mental health focused programs.

Kevin Thibault, Secretary of the Department of Transportation, has spoken to our group the last couple of years. He notes that Florida traffic is increasing quickly, not only because of our population but because of 125 million visitors annually, which could grow to 175 million. The state gas tax does most of the DOT funding. Fuel consumption will peak in 2025, which is good for fuel preservation but will mean less revenue collected.

Jared Moskowitz, the former Broward Representative who now serves as Director of the Department of Emergency Management, talked greatly about hurricanes and recovery. He stressed “prepositioning” of assets prior to landfall of a hurricane and streamlining the reimbursement process for local governments and residents. The administration in Plantation’s city hall credits Moskowitz as being incredibly helpful in getting Plantation disaster recovery funds.

Jamal Sowell, President and CEO of Enterprise Florida, introduced his organization, which is the public-private partnership between Florida’s business and government leaders and is the principal economic development organization for Florida.

Mary Mayhew, Secretary for Agency for Healthcare Administration, spoke of the changes in the Medicaid system that her office is working on implementing and her overall commitment to providing access to healthcare.

John Truitt, Deputy Secretary of the Department of Environmental Protection spoke about the Governor’s commitment to water quality and shared examples of specific funding requests and policies that will help water quality in and around Lake Okeechobee as well as the state’s numerous springs and rivers.

Over the two days, legislators who represent Plantation, as well as around the county, joined the group and spoke on their priorities. Sen. Perry Thurston serves as Vice Chair of the Delegation and was recently elected by his peers to serve as Senate Minority Leader. He talked about the importance of fighting for Broward and his anticipation of what will come this session. Sen. Lauren Book spoke of her commitment to serving children and families and touched on the focus of prevention, particularly in the child welfare system. Next Session, Plantation will be well represented in the leadership of the Minority Party, Reps. Bobby DuBose and Evan Jenne will be serving as co-leaders. Both representatives encouraged attendees to stay involved. Rep. Anika Omphroy shared her concerns that the Opportunity Zones program, created by the federal government, is not being deployed correctly and wants the state to position itself in the best way possible to maximize opportunities for communities. Rep. Michael Gottlieb spoke on his efforts to pass Alyssa’s Law (named after MSD victim Alyssa Alhadeff), which would mandate panic alarms in schools. Rep. Dan Daley spoke about his efforts to advance firearm reform measures and the importance of Broward residents coming to Tallahassee to advocate. Rep. Patricia Williams shared policies that she is working on, including human trafficking education. She ended her speaking by encouraging everyone to come back next year with two friends.

.. and some major state electeds

In addition to our hometown legislators, we heard from:

Senate President Bill Galvano gave the main address during dinner. He discussed his commitment to civility in his Chamber in his last year in the Legislature. President Galvano has served for 16 years and is regarded as a “great friend” to Broward.

Sen. Wilton Simpson (the next Senate President) discussed his commitment to supporting the child welfare system, the agriculture industry and environment. He said he looks forward to working with the Broward delegation as he becomes the presiding officer in the Senate.

Sen. Gary Farmer (the incoming minority leader) introduced the Senate President and spoke at the closing reception. He repeatedly highlighted how much participation has grown with Broward Days.

Rep. Chris Sprowls Chairs the Rules Committee and is in line to be Speaker of the House after the 2020 elections. He spoke about budget making decisions and that one-third of the states $92 billion budget is K-12 education, one-third is health care (primarily Medicaid) and then there’s the rest. To those who says he might be against certain expenditures, he notes that there’s only so much money. He points out the process of making the tough decisions to balance priorities.

Rep. Paul Renner, Chair of Judiciary Committee (and in line for Speaker in 2022), said most stories you read are about fights along party lines, but “it’s not nearly as bad as it might look. We really do work together.” Representative Renner lived in Broward for roughly 10 years and has remained a long-time friend to our community. One priority of his is a neo-natal abstinence program designed to help substance exposed newborns.

Rep. Danny Perez (in line for Speaker in 2024), focused much of his conversation on relationship building. This could not have been more appropriate as he serves a district in our neighboring county to the south. As Speaker in 2024, it is crucial that Broward develops and maintains a strong relationship with Representative Perez.

Rep. Shevrin Jones currently serves as the Chair of the Broward Legislative Delegation and welcomed attendees at the Opening Reception.

Rep. Chip LaMarca representing northeast Broward, introduced Shane Strum, Gov. DeSantis’ Chief of Staff. He is working on seaport and compensation for college athletes bills. He added, “it’s easier to be a pro-environment Republican now because of the new Governor.”

Rep. Holly Raschein, who serves as Chair of the Agricultural Appropriations Subcommittee, made it clear that it is important to “remember that Florida is an agricultural state as well.” A fierce advocate of the environment, she acknowledged that the coral reefs that surround the state are under attack due to bacteria run-off. Many Broward Days attendees had the opportunity to discuss their city’s water projects with the chair after she spoke.

This year, Plantation made six appropriation requests, i.e., requests for money, all of which must clear several committees and the veto pen of Gov. Ron DeSantis. Think of each one as a baby sea turtle, trying to make its way into the ocean. The odds aren’t good.

We asked for $1.5 million for an incident command mobile vehicle (motivated by the July 6 Marketplace explosion), $300,000 for special needs playground equipment at Liberty Tree Park; $1.5 million toward our Police training facility and gun range; $2 million for Central Park building renovations and expansion; $868,178 for Breezeswept Park Estates water main replacement project and $1.5 million for reconstruction of Fire Station 1. Our legislative representatives are working to further the requests and ensure Plantation can receive state dollars to help local needs.

As I’ve often said, I underestimated the effect state government has on municipalities. It’s large. I’m glad to share this synopsis of an event that provided numerous opportunities to be active in the state legislative process.

Plantation City Council President Nick Sortal can be reached at NSortal@Plantation.org or 954-498-5337.