The backup material behind my points

During the Jan. 26 City Council meeting I posted some very serious reasons why having a strong mayor is problematic. I listed a litany of situations the current mayor has gone through, and point out that had these acts been committed by a city manager, we would have recourse. As it is now, the mayor can continue her behavior for four years.

I had preferred not to go into this topic at this time. First off, it harms the reputation of our city, and that bothers me. But it is Exhibit A of why a strong mayor is not a good idea. When you see the details, I think you understand why a city manager is vital.

You likely had questions about where my info came from, especially if you didn’t follow city happenings before, say, 2020. So I’ll provide the links and some documentation here. These are almost solely from public records, so you yourself can seek them and review them. Our city clerk is April Beggerow, ABeggerow@Plantation.org. Also note that to better read the letters and graphics, click directly on them and they will enlarge. 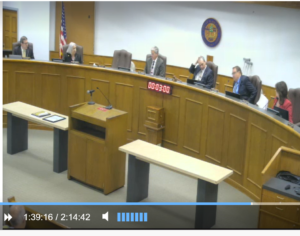 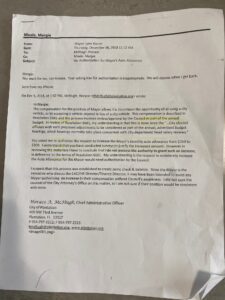 ty officials that she was in violation of city Resolution 6661. Then she fired one of the officials, HR director Margie Moale, who later settled a wrongful termination suit for $50,000, the most a mayor can approve without city council approval.

At the Sept. 11, 2019, meeting, during budget approval discussion council member Denise Horland presented an email from CAO Horace McHugh, dated Dec. 7, 2018, and sent to Moale. McHugh states she is not authorized to give Stoner an increased car allowance because such approvals must go through city council during the annual budget process. He cites 6661. Stoner, who was copied in on the email replies, “You work for me, not for Horace.” (Horace left in about March 2020 for Coral Springs.)

The money soon then went through without her consulting the council, although a July 29 video tape of the meeting shows Stoner untruthfully saying she did not receive an increased car allowance. (She started with $350 a month, said she did a survey and usual and prevailing is $500 a month.)

Then on the Sept. 11 tape she says she did get the money “after two respected officials said I could.” (A lie, as the email shows.) You should probably watch the tape, starting at 1:36. Even if you read no further, you should see with your own eyes.

She first says it’s not compensation, then says sarcastically to Horland “your concern is noted.”

She denies she was trying to bully council or work around them. In the tape, council president Ron Jacobs said, “if you were on council and the mayor did that, you’d go ballistic.”

The whole thing makes me incredibly sad. Again, any city manager who pulled this stunt would be gone.

Added two high-level jobs on her own 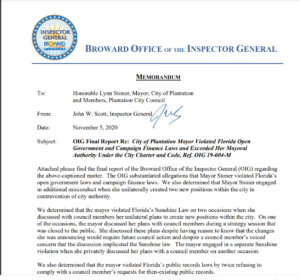 This is all documented in the November 2020 report created by the Broward Office of the Inspector General. Not me, not anyone involved in politics.

The OIG’s investigation determined that Mayor Stoner violated the city charter and code, engaging in further misconduct, when she unilaterally created and staffed the two deputy or assistant city administrators and created their job descriptions.

The report also stated that Stoner overspent on her campaign to get elected, then “cooked the books” afterward to cover up her actions. That is not related to this argument, so I am not addressing it further here.

Read the entire report at https://www.broward.org/InspectorGeneral/Publications/20201105OIG19004MFinalReport.pdf

he city conducted an employee survey and the results show the employees have little respect for this mayor. They feel relatively good about their supervisors and department heads, but there’s a personality problem with the person at the top. If we have a city manager with that kind of disapproval/poor morale, we would make a change in leadership almost immediately.

The city clerk can provide you with a copy of the report. There are two ve

rsions. One includes employee comments, the other doesn’t.

Gov. Rick Scott approved a $1.1 million appropriation for public safety improvements in Plantation. The city had until July 1, 2019, to spend the money. Our mayor, apparently not knowing of the deadline, let the deadline pass, and that money is gone.

I don’t really blame the mayor herself for this mistake; it is one of a thousand details a person has to learn on the job. If we had a city manager, who has experience in state appropriations from having worked for a decade or more in city government, that wouldn’t have slipped past us.

Watch the video at about the 1:14 mark. Council member Denise Horland notes that money to build Fire Station 1 is no longer there. In this meeting, on Sept. 18, 2019, she notes that the state money expired back on July 1.

Also: The city paid a $50,000 settlement to former HR Director Margie Moale because the mayor wrongfully terminated her. ($50K is the most a mayor can spend to settle such a suit without requiring approval from the council.) A city manager would know how terminate people properly. 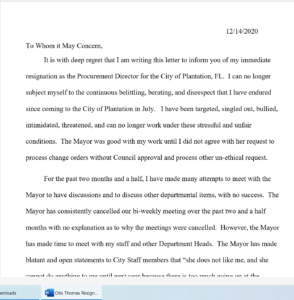 Several comments in the employee survey refer to bullying and attached is a letter from Otis Thomas. The mayor, with council approval, created the procurement director department head position. And to include the other side, I think it was a good idea. Combining forces and adding more power to procurement likely has meant that we’re getting better deals on things we buy, saving tax (residents’) money. But Thomas points out here some instances where the situation has been unbearable. (Anecdotally, I have collected other tidbits and examples from other employees.) We can’t do much about it in the current form. But had a city manager pulled off some of these behaviors, there would have been consequences, at least a warning.

A mayor is required to evaluate our 13 department heads annually. The evaluation helps the public see why a person was given a raise (or not) and is also valuable to the employee. (I used to sweat over being evaluated and looked at it as a time to have a heart-to-hear with my supervisor and/or find ways to do better.

Councilmember Denise Horland led the inquiry and I came in later, inquiring about the lack of evaluations some time ago. I brought it up at council meetings in fall 2021 and they answered in double-talk. 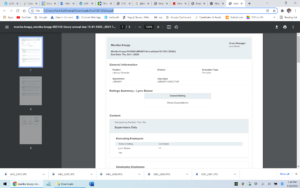 So I filed a public records request for two long-time employees — Finance’s Anna Otiniano and the library’s Monika Knapp — so I could compare and contrast the evaluations they were due with what prior mayors had done. The email from the city clerk confirmed that no evaluations were done in 2019 nor 2021 and other department heads had similiar gaps. (So how do I, or the public, know whether or not they are doing well?) And note the extreme brevity from the mayor. She really typed only one sentence. And also note that the due date was Oct. 1 for their evaluations; these were completed six months later, in May. A city council could have directed the city manager to do the dang reviews, and that would have been that. 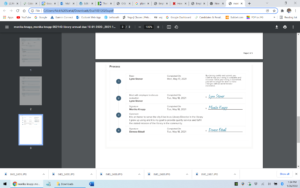 I know this is a pile of things that reflect poorly on our current mayor. There’s really no other way around it. But even though this issue really isn’t about her, I want to point out some good things.

Mayor Stoner often makes good hires. Jason Nunemaker as CAO comes to mind, and while, yes, a significant number of people are gone, often they have been replaced with better employees.

Mayor Stoner has been active in working for funding for roads and other development projects. I like to say that “she sees things the rest of us don’t.” She also innovated the “Light up City Hall” which brings a sense of community to our city each December.

Mayor Stoner helped me greatly during my 2018 campaign. I am grateful for the tips and advice she gave me, including one night where I was demoralized by meeting difficult residents while canvassing. She invited me to her house and told me to hang in there. She also speaks well at public appearances, such as teaching Plantation Middle students how to shake hands.

I also included the expenditure by Mayor Bendekovic over a Christmas light dispute before Stoner was elected. My point is that all mayors run into some kind of landmine. However you feel about that situation, a city manager could have done better.

I also want to correct a perception that I suddenly floated the city manager thing as some kind of reaction to some “wrong.” This has been in my head for almost a decade and was solidified as the way to do business after several conversations with the Florida League of Cities, leaders at nearby cities and others. Looking back, I could have tried to get it on the ballot for 2020, but I would have had to have started the process almost immediately after being elected in November 2018. Also, since it was a contentious election, some could have thought anyone supporting this so soon had sour grapes.

I also want to address the argument that the 2014 vote should suffice. As politics go, the people now against a city manager spoke for it then, because of their dislike for Mayor Diane Veltri Bendeckovic. Mayor Bendekovic was the biggest opponent against the referendum, which has questionable wording on top of things. Here is an article where Bendekovic critic Rico Petrocelli speaks in favor of a city manager. (The kicker quote.)

Bendekovic campaigned hard to get the proposal denied and was successful. i believe now is the time — whoever the mayor is — for a city manager. with a “mayor” still elected and being the political leader, but not the everyday CEO. It is what is best for our city.