The city council approved tweaks to plans for the south portion of the new development called Plantation Walk. Representatives for the development, the old Fashion Mall site west of University Drive and north of Broward Boulevard, had already received approval for a significant project.

The council on Nov. 20 approved changes that include a 160-unit senior complex (described as a “cruise ship on land”) and a 135-room Springhill Suites by Marriott. Yes, there’s a Sheraton Suites just a few hundred feet away but project managers point out that the new hotel serves a different market segment (i.e., the prices are much lower).

There had been plans for a grocery store in the area, but those plans have changed.

The northern portion of 32-acre Plantation Walk should open next year. New restaurants will include: Mana Poke, Urban Bricks and Tacocraft Taqueria and Tequila Bar. Office Evolution co-working site also is among the first tenants.

Again, the council approval was just a tweak. The entire project was approved back in 2016. The changes were also supported by city staff and the city’s Planning and Zoning Board. 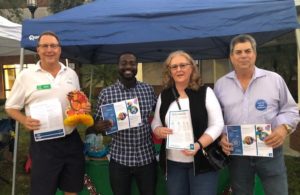 I was joined by four other members of our city’s Complete Count committee staffing a booth at Friday’s Light Up Plantation event at The Fountains. We informed visitors of the importance of the census. (Federal funding for Plantation.) You’ll be seeing more of us – I’m the co-chair – as the April 1 count date approaches. Thanks to Jelani Harvey (left of me), Loretta Kenna, Hank VanBaalan and Nancy Fry (not pictured).

Unfortunately, the Broward School Board rejected our proposal to allow advertising banners at Broward public schools in Plantation. The reasons are kind of complicated. I’m just updating you all that we’re all working on it. We want our schools to be able to generate more advertising revenue.

City administration is presenting an update on projects connected with the $70 million bond voters approved in 2016. The update is at 6:30 p.m. Wednesday, Dec. 4, and is open to the public. The city council meeting follows at 7:30 p.m. Also note that the second council meeting in December is the following week, Dec. 11, then we are off until January.

Mrs. Sortal and I are attending the Interfaith Thanksgiving service at 7 p.m. Tuesday at Plantation United Methodist Church. Sixty children from four congregations will combine for a choir and 14 clergy are slated to attend…. The Long Run, an Eagles tribute band, is the next offering at the monthly concert series at Central Park. Food trucks will be there at 6 p.m. Friday, Dec., 5 and the music starts at 7 p.m. … Light Up City Hall, a new event, is from 5-9 p.m. Saturday, Dec. 7. Food trucks, arts and crafts, music by local school groups and the movie “Home Alone” are scheduled.

My fellow council members elected me as council president for the next 12 months. All council members have the same vote; the president just runs the meeting. The job usually rotates among the five of us, but I won’t be disingenuous about it: I’m very happy to have that extra dab of control to drive my priorities. Mainly, I want to make sure our code enforcement rewrite is completed and that our charter review proposals are on the ballot – two things that I think everybody is generally on board with.

This newsletter originates on NickSortal.com and is shared via various platforms. The best way to get it is to subscribe to my Facebook page.