Two members of Plantation’s Parks and Recreation Department visited Wednesday night with Jacaranda Lakes residents who were concerned about changes planned for the park on Northwest 94th Avenue.

The city plans to install a playground in a new location and eliminate a tennis court and use that concrete area for pickleball, hopscotch and other games. The project costs the city about $120,000, they said.

Assistant Parks and Recreation Director Phil Goodrich answered about an hour’s worth of questions, all the time noting that the idea is to keep the area as a neighborhood park. He said he would take residents’ suggestions back to the city officials planning the park. I think we had about 30 attendees, many of whom were passionate and engaged. 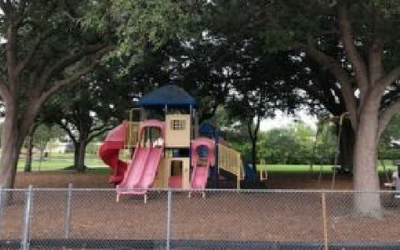 PLAYGROUND PLACEMENT: Residents were worried about the new playground’s placement, which they feared was too close to 94th Avenue. Goodrich responded that the playground would be fenced in and there was still a sidewalk and swale between the planned park and the road.

New playground equipment has already been purchased – as has equipment for 33 other city playgrounds — and the area will have a rubber-like surface. (No more sand, mulch, etc.) As part of a master city plan that will bring shade structures to about six neighborhood parks, a canvas-like shade cover, removable if a hurricane approaches, will be added a few months after the playground is built.

Goodrich listened to residents’ suggestions to move the park to the east side of the tennis courts, near the canal. He said the existing playground area is endangered by aging oak trees that also cause a lot of dirt and insects to fall onto existing equipment, compromising the longevity of the equipment, and Matt Thompson, maintenance supervisor, said he didn’t like the existing location because careless drivers attempting to park their cars could barrel through the chain link fence and into the playground area. (Counter-argument: I don’t think that’s ever happened and the park has been there about 30 years.)

TENNIS COURTS: The parks employees said they also did a spot check of the tennis courts and said rarely are both courts being used, a statement that many in the crowd challenged. Goodrich did cite the popularity of pickleball, and the idea of moving the basketball hoop from the parking lot to a safer area (one of the existing tennis courts) also makes closing off one of the courts a good idea, in the parks’ departments’ opinion. Just building another slab of concrete for more of those activities is too costly, he said.

THE PROCESS: So that’s all the facts. Well, kind of. Goodrich and Neighbors-for-Neighbors Chair Sharon Vogel both said that the parks officials wanted to visit with Jacaranda Lakes residents. It was also clearly very important to Mr. Goodrich to correct some thoughts shared by residents on social media.

The meeting was arranged through the Neighbors for Neighbors committee of the Jacaranda Lakes HOA, a group that Sharon organizes and runs together with co-chair Christie Pfingsten to communicate, educate and connect with neighbors in Jacaranda Lakes. The annual Family Day in the Park has become the group’s signature event. (By the way, she often expresses a desire for more people on the west, newer, portion of Jacaranda Lakes to get involved. Please. If you live anywhere in Jacaranda Lakes, email nfn@jacarandalakes.com)

I consider our neighborhood fortunate that we were able to give our opinions before the city forged ahead with the plan. You can argue it’s a minor plan, but to many of us, that park is a big deal. Pfingsten is sending out a survey about tennis court use, by the way, and FYI she was among the first to suggest placing the park on the other side of the tennis courts.

Also note that the city council will have to sign off on the plan, and, most importantly, the expenditure. (Many of you know that I’m running for City Council in the November election. More on that in later months.)

WHAT I LEARNED: The affair also hammers home the need for all of us, including me, to be better informed. As a former journalist, I consider myself a good communicator and I keep saying that if I’m elected to city council, that’s an area that will be improved. But I learned from this experience that I need to put in more work understanding how to make sure neighborhoods, any neighborhoods, and our city leaders communicate clearly about changes. In our case, please make sure you are on the HOA email list. Email danielle@unitedcommunity.net.

MY HISTORY: I want to point out that parks are kind of my thing. I was assigned to a beat called “recreation issues” in southwest Broward from 2001-2008 and wrote articles on not only parks expansions, but water safety, sports parenting and background checks for youth sports coaches. My work earned me recognition for media excellence from the Florida Parks and Recreation Association in 2006. So, to quote Carl Spackler from Caddyshack, I got that going for me, which is nice.