Plantation police: Preparation is the name of the game 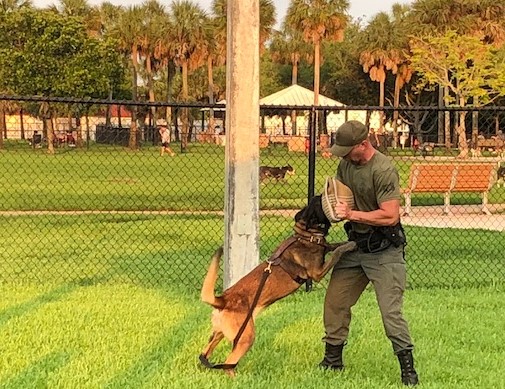 There’s a dizzying amount of action in law enforcement, and it’s not always full of the drama you see in one of those 60-minute police TV shows. While what happens behind the scenes on a daily basis at Plantation’s Police Department isn’t as flashy, it’s still darned interesting and important work.

A TV show on our city’s uniformed men and women would feature few full-speed chases and perhaps have the words “community involvement” in the title, and the stars would say such things as “put your purse in the trunk” and “know your neighbors.”

Because I’m working to understand everything possible about our city, I took the Plantation Citizens’ Police Academy course, facilitated by the department’s Lynn Braden, meeting nine Monday nights for two hours a night. I want to hit the ground running in November, on the first day I hope to join the Plantation City Council.

About 25 others and I and heard from 20 officers and civilians in the course, which ended June 25. Topics included SWAT operations, traffic patrol, the gang task force, DUI patrol, school resource officers and a trip to see the city’s canine (K-9) unit.

Here are my takeaways:

Training: I didn’t realize how much training goes into every officer. To be on road patrol, which is the starting point for officers, there is a three-week testing course, involving everything from agility to swimming . Then there is their police academy, which takes another 24 weeks. That lead-up time is concerning to the department right now, because 20 officers of the 180-member staff will be leaving the force in the next two years via the Deferred Retirement Option Program (DROP). Once officers are trained, they can opt to pursue specialty training. Going beyond road patrol often takes courses that last a couple of weeks, with mandatory refreshers.

Community involvement: Rather than have to catch the bad guys, the police would rather there not be any crime to begin with. So DUI specialist Jeffrey Beauregard, for example, walks the nightclubs around midnight. If he sees someone impaired, he suggests they not drive. (I used the basketball comparison that good referees will try to talk players out of the foul, then call it if they must.) The police department stresses that we all are part of community policing. Officers want you to call if you see something. (Non-emergency number is 954-797-2100.) They want neighbors to know each other, and, for goodness sakes, don’t leave valuables sitting in your car, in plain view.

Multiple specializations: It seems like everyone in one unit has worked in another as well, and some still are currently working in several units. For example, Sgt. David Khaleel, who is now head of the crisis response team (which does the hostage negotiations, although they are rare in our city), was a SWAT officer before that. We also spent an evening watching the K-9 unit. Fast facts: Officers take their dogs home, treat them like family and to the dogs, sinking their teeth into a bad guy isn’t a vicious act: It’s the reward for a successful chase.

Call and service volume: March had 464 accidents, 6,429 calls for services, and 122 arrests. The 9-1-1 line averages 167 calls per day in Plantation. Now, in many of those cases, the calls were not true emergencies — actually the most prevalent 9-1-1 call is a pocket dial – but there is no way for an officer to tell what is worth a trip and what isn’t until the information is gleaned. So much, much work for police is about the preparation.

In the course, there wasn’t talk about  money, benefits or vacation time. For those who don’t know, police and fire operations take up more than half of our city budget. (It’s that way in every city.) And the departures of so many officers in the next two years is a worry and even if things go well there’s going to be a large loss of institutional knowledge.

If you elect me, you’ll have someone on the council who is familiar with the inner workings and challenges of Plantation police, thanks to the nine Monday nights I spent taking the academy course. I will also use my voice as a community leader to advocate for neighborhoods – everybody – to be involved.

Meanwhile, I want to recommend the course to everyone. A better understanding of our law enforcement process helps our entire city. The next course will be 6 to 8:30 p.m. on Tuesdays and runs from Sept. 25 to Nov. 13. Contact the department’s Lynn Braden at 954-916-5601.

And speaking of educating yourself, give this page a Like. You’ll receive a few (not too many) posts like this that could be valuable as you choose your next city leaders.